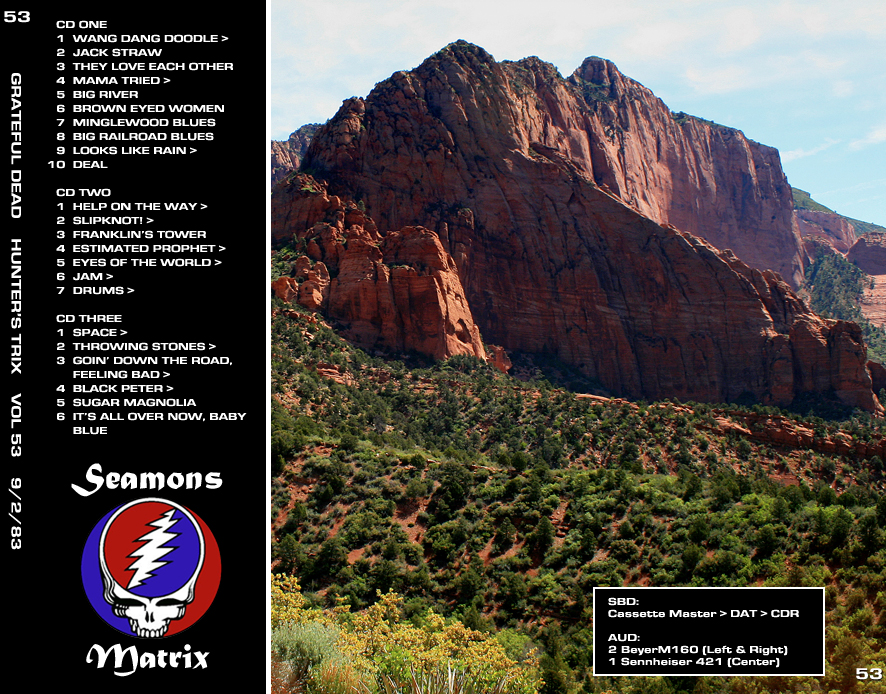 [shnid=17958 (Doug Nawrocki) was used to patch most of Drums, the Peter>Magnolia transition, and the crowd before the encore.]

[There were several momentary cuts throughout the AUD.]

and to Rob Bertrando for pitch verification.

Reviewer: TheDewd - favoritefavoritefavoritefavorite - October 2, 2017
Subject: Minglewood! Big RxR!
What a smokin' Minglewood! I don't really know if anyone else calls it this, but I tend to refer to the 1980-1984 shows as their "blues" period. To be sure, they played blues before and after, but their sound during this time seems to be absolutely tightest when playing more traditional blues numbers like Minglewood, Little Red Rooster, Deal, Big Railroad, et cetera. The Minglewood and Big Railroad here are excellent examples of what I am trying to convey.

Set 2 - One of my all-time favorite Slipknot jams - definitely one of the best of the '80s - in fact, everything here is super-smokin' - this show tends to glide a little more lightly than what was typical for '83 (this one sounds more like '81-'82), but Jerry is absolutely on FIRE throughout the entire arc of this set.
Reviewer: kee-zeee - favoritefavoritefavoritefavorite - August 30, 2015
Subject: Crippled but Free
Nice Matrix..I always look for Hunter Seamons work~! Here is another solid performance of this 83 September run..great song selection in 1st set..I love the entire 2nd set with flubs and all~Whichever way your pleasure tends... Give It A Whirl>Forever Grateful>Forever Dead~> if you plant ice your gonna harvest wind
Reviewer: Folkhippy - favoritefavoritefavoritefavoritefavorite - July 17, 2013
Subject: Hunter!
Once again, Hunter has taken a mediocre SBD and a decent AUD and brought out the best in both. A stand out show with an almost perfect Help>Slip>Franlin's. Too bad Phil rushes the transition into Slipknot and the band crumbles in one of those classic Grateful Dead ways—they get back up and tear through Slipknot like nothing happened. The Estimated jam is EXTRA jazzy on this night. (~):-}

Thanks for making this show sound so good Hunter!
Reviewer: Stellablu122 - favoritefavoritefavoritefavorite - October 5, 2009
Subject: Rocky Mountain Dead
I jumped on this short tour in Red Rocks and they were still talking about this show. I have to first say that these matrixs' really are the thing for '83 shows. Healy was using the old beta tapes and they always sounded way too hissy for my taste, this is the perfect marriage.

As for the show I think it has moments of brilliance and some rough spots.
I have to say that the RRB is KILLER!!! It may be one of the best ever. They are just styling on it and it sounds great, Phil is driving it along so well. The LL Rain is epic and then a ragin' Deal is a sweet ending.

The Help> Slip> Franklin's is aliitle messy to start and the Slip knot! is ok compared to other versions they played this year. They seem to regroup by the final chorus of Franklin's and really end the song strongly.
The one they played two nights later is WAY more happening!
The Estimated> Eyes is a real high light and played very well.I think the Eyes is the better of the two.
Post space the Black Peter> GDTRFB is HUGE and as mention before the Sugar Mag ending is a big opps but they do recover for SSDD.

The Baby Blue, like so many they played this year, is simply stunning. It ranks up there as one of the best they played. My personal all time favorite is 4/22/83

phil is on basting the audience with bombs and
Jerry playing is unique, extended and bluesey jams.


this beyer audence has been a wonderful fob audience source which I found a 1st gen cassette long long ago. I played the tape out to be honest and just always loved this show.

It just got better with this matrix
thanks hunter

namaste
Reviewer: srtg83 - favoritefavoritefavoritefavorite - September 7, 2009
Subject: Thanks Hunter
This matrix improves on its two sources, the fob gives life to the flat sbd and the sbd dampens the pavilion-echo of the fob and enhances instrument separation.

One of the better shows of 1983, Garcia is on fire from beginning to end as the rest of the band try to keep up. The pace is frantic and the playing is edgy and reckless. Some typical 1983 sloppiness does come through, the most glaring is the end of the Sugar Mag jam when the break is mistimed resulting in an unfortunate train wreck. Notwithstanding this, if you like your Dead full speed, kicking-ass, this show and this recording will hand your brain matter back to you on a platter.
Reviewer: sammann - favoritefavoritefavoritefavoritefavorite - September 4, 2009
Subject: love this show
One of the high pinots of a long touring career. Place was half empty and my buddy got thrown out during the 3rd song, but had a great time anyway. Truly great playing for the era.

Uploaded by Matthew Vernon on September 1, 2009